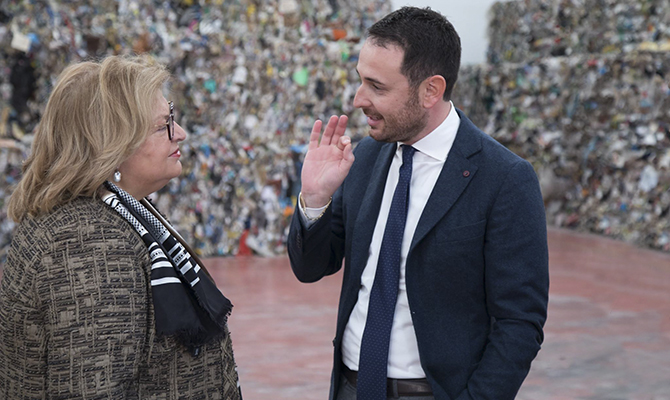 Giuseppe Mattozzi, first-generation entrepreneur. Born to a middle-class family, he invents a waste cycle that eliminates the need for landfills. Nevertheless, the “fuel” obtained in this way, from which energy can be produced, must be shipped abroad. Then, Italy buys the energy back. The clash with the bureaucracy. The madness of the broken roads.

Sometimes a little goes a long way. An idea and the enthusiasm can be the foundation of a project - innovative and revolutionary, able to change the vision of a sector. A sector which is often regarded with suspicion - the sector of waste recycling.

The project is that of the TecnoRiciclo Ambiente® of Anagni, a very young company, led by a very young man: Giuseppe Mattozzi.

An adventure born out of an idea. Nothing more. Because Giuseppe, 34, is not the son of a prominent family, but of a simple employee.

Until yesterday, by digging, our fathers found archaeological finds. In twenty or thirty years our children will find trash».

Yes, but how? With a system that completely closes the dry waste cycle. Basically, from the separate waste collection, a selection of glass, plastics, cans and the related dry unsorted waste (with the exception of the organic waste) arrives in his plant. In the plant there are two lines: one dealing with glass, paper, plastics and metals, which are later sent to the specific recycling consortia.

The other line is related to the unsorted waste, and here it is where innovation occurs: the biggest possible amount of waste is recovered, but the remaining, instead of ending up in a landfill, generates energy. The problem is, this cannot be done in Italy. Because of missing laws, or laws which fell behind while the clock of development kept ticking. So, those scraps, capable of producing energy through combustion, must be loaded on railway carriages and sent abroad, in order to complete the project.

That waste which previously would have been buried, now feeds a plant and generates electricity. Abroad. Ironically, Italy buys back part of this “Made in Europe” electricity.

Here Giuseppe plays his game, here our nation must change: «I began working in a most sensitive sector, for which Italy pays a fine of 120 thousand euros per day to Europe. In my small way, I want to give an innovative and clean image in the waste sector».

The dream of Giuseppe Mattozzi grows day by day: «Today we have eight employees, from June they will be ten and by the end of the year we would like to reach twenty. Our plant is authorized to treat 30 thousand tons per year and we will be fully operational soon. In November Municipalities will start to deliver their waste too».

Indeed, an exciting project. But the road to get there was tortuous and full of pitfalls: «My project started six years ago and was born thanks to a group of ordinary citizens who believed in me».

A period of time that leads to 2018, divided as follows: a year and a half for the planning and three years to obtain the authorizations. Delays that put one to the test. And paradoxical situations, to put it mildly: «One day, – Mattozzi explains – in order to obtain one of the most important authorizations I spent the whole morning ranting, and not in order to demand something which was not due to me, but simply to have a signature I was rightfully entitled to».

Besides, in the waste sector, the clash with bureaucracy is not the only one: «We have made important commitments and keep doing so, but every day I see the enormous disinformation and scarce maturity in relation to the branch of waste recycling. In public imagination it means potholes, foul smells, pollution. But this doesn´t happen if one complies with the laws. There is much talk – he goes on– about recycling and good practices, especially in schools, but then those who work pursuing these objectives must overcome genuine obstacles posed by poorly informed institutions and citizens, convinced that one wants to dig a landfill site where to bury waste and poison the environment. In our case, we do exactly the opposite: we eliminate the need for landfills».

To date, for the Tecno Riciclo Ambiente®, the bureaucratic problem doesn´t exist any longer, but the others are all there. All in a typical local style. Such as the state of the roads in the industrial area of Anagni. Here, too, an anecdote: «We really made a fool of ourselves that time when the delegation of a recycling consortium was supposed to visit us. The delegation was late and as I rang them up, I discovered that the national chief of the consortium had a tyre broken into a dip».

This is a problem very much felt by entrepreneurs: «Industrial areas – explains Mattozzi – are not evil, just make them travelable and controlled and they can be the feather in the cap as it happens elsewhere. And not in northern Europe, just in the nearer northern Italy».

Another dream in Giuseppe´s positive vision of the territory, who keeps going, without giving up an inch. «All the efforts we deploy come from our desire to do things, we really want to improve our territory». And the TecnoRiciclo Ambiente® started right from its territory: by adopting a roundabout, scheduling events with schools and senior’s day-care facilities. And with a project, in synergy with a university, to create urban furniture by using part of the plastics which are now buried in landfills. Those landfills which, yes, are the real cause of pollution.

A new world to be achieved with the scraps of the world itself. A world that, for Giuseppe, has a very clear picture: «I dream that the waste storage and treatment plants in the future can be social gathering places. Parents and grandparents bringing their garbage, topping up their badge and the children playing in a park inside.».

Maybe with toys made from recycled materials.

WE PRESENT THE SPONSORSHIP OF FROSINONE CALCIO (Frosinone football team)

With the signing of the sponsorship agreement for the next season, TRA becomes OFFICIAL PARTNER of the blue-and-yellow clad lions.
Anagni, 22 August 2017 - As an Official Partner, Tecnoricicloambiente® will support the 2017/2018 season of the Frosinone team with whom it shares strategies and ambitious goals: both companies confirm that they expect to reach important targets within the new year.

For TRA, football is an opportunity to underline its interest in future and innovation. “Tecnoricicloambiente® sees in football, and particularly in the Frosinone team, a further chance to demonstrate its mission and its values, such as commitment, efficiency, reliability, flexibility, safety and respect. These are the cornerstones upon which to build a winning team in sport, but they are also the essential values for a successful company. The sponsorship of and cooperation with the Frosinone Football Team are based on this commonality of values”. “We have chosen Frosinone Football Team, one of the best local teams, that builds its success on teamwork and on the pursue of excellence, as well as we do. The new season will bring to both of us great success, we are sure about that ” says Giuseppe Mattozzi, Sole Director and founder of Tecnoricicloambiente®.

Tecnoricicloambiente® will be available to the Frosinone Football team and for the structure of the “Benito Stirpe” Stadium, in order to carry out events related to waste recycling. This allows every member of the team, the managers, as well as the helpers and supporters, to set a good example to the rest of the community. Furthermore, it promotes respect for the environment and gives a tangible contribution to the area.

We always work in a way to constitute a drive towards the future. We believe in the importance of creating a strong bond with the territory and the citizens. This is not only business-linked but also cultural, aimed at the valorisation of waste, environmental education and compliance with regulations.

Giuseppe, the boy who dreams of erasing landfills